Hoopytyrides HQ is located in an old, dual-bay auto shop, with many of the original accouterments still intact, including the pinups that adorn the walls of the basement machine shop, old-school hydraulic lifts and a Clayton dynamometer. Mister Jalopy describes himself as more of an assembler than a engineer, pointing out that he simply takes apart existing technology and puts it back together to better suit his needs. Either way about it, Mister Jalopy's creations are fun, functional and attainable by interested makers who want to create their own repurposed entertainment equipment. 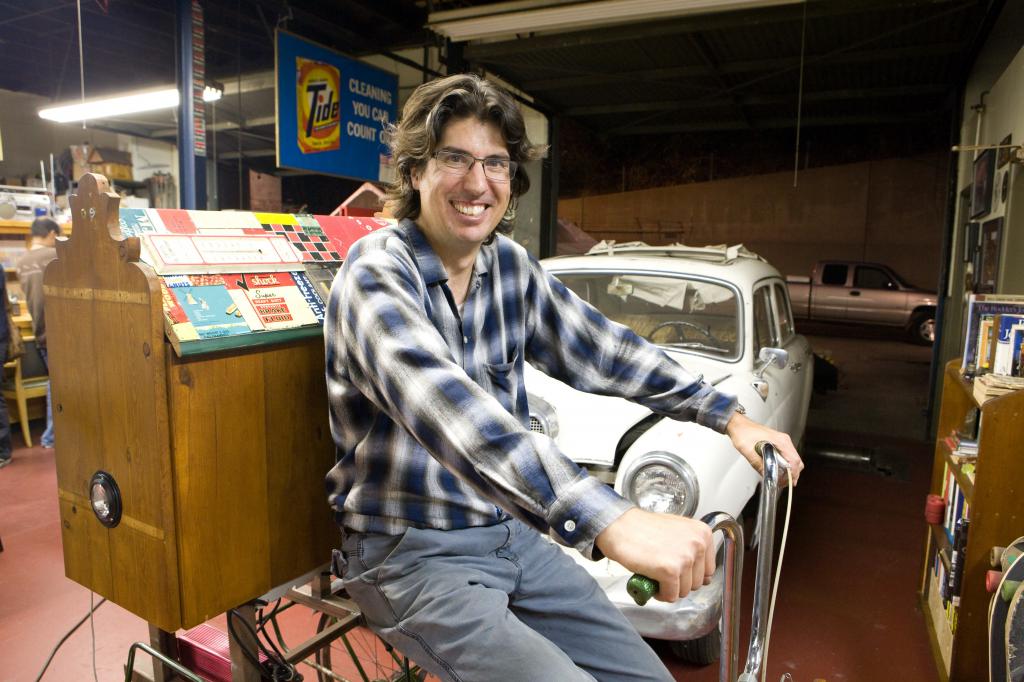 You can check out the rest of the photos after the jump. 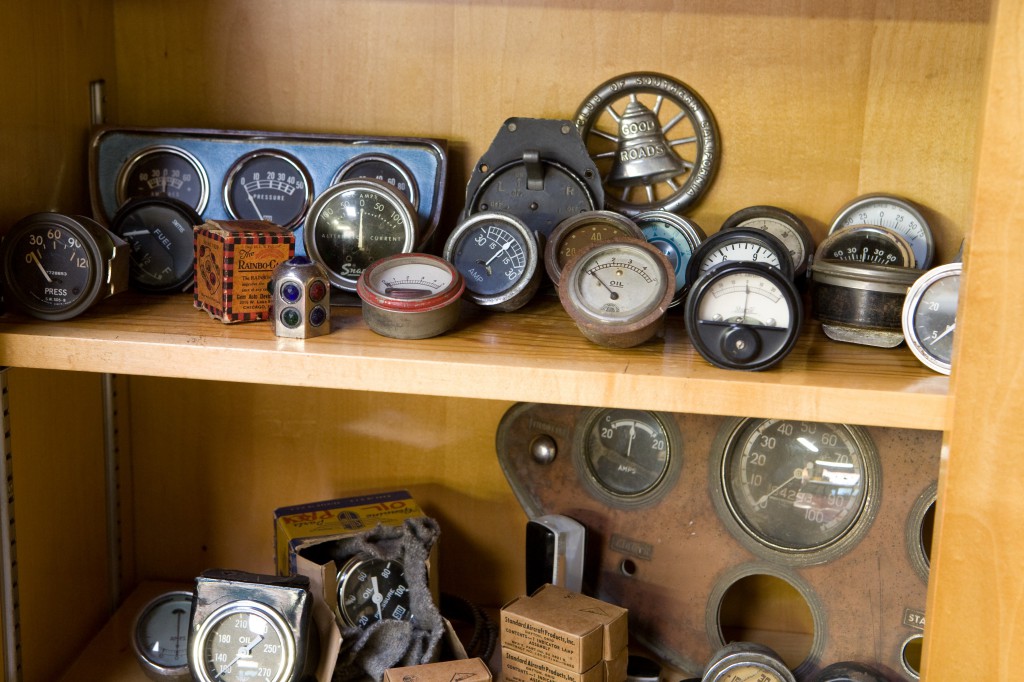 A collection of mostly automotive gauges yearning to be utilized in one of Mister Jalopy's future projects. 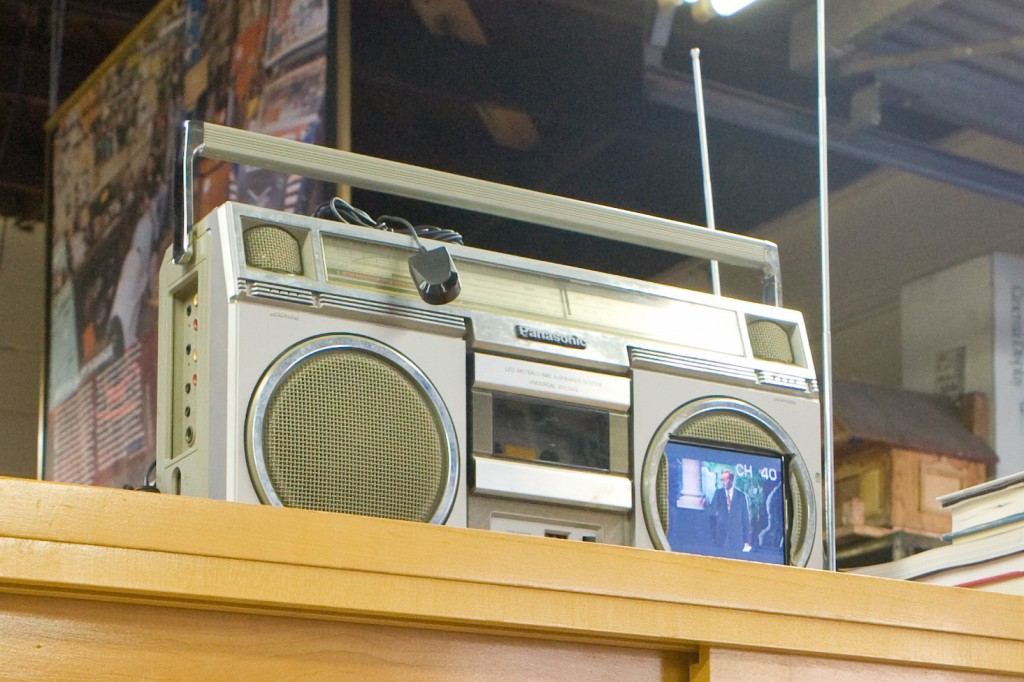 One of Mister Jalopy's recent projects: Boombox as a Platform, will be featured in the upcoming issue of Make. This boombox has been converted to a television, with the addition of a TV tuner. The former Play Station 1 screen, which can be acquired on ebay for under $100, is located on the front of the boombox in place of the right speaker. 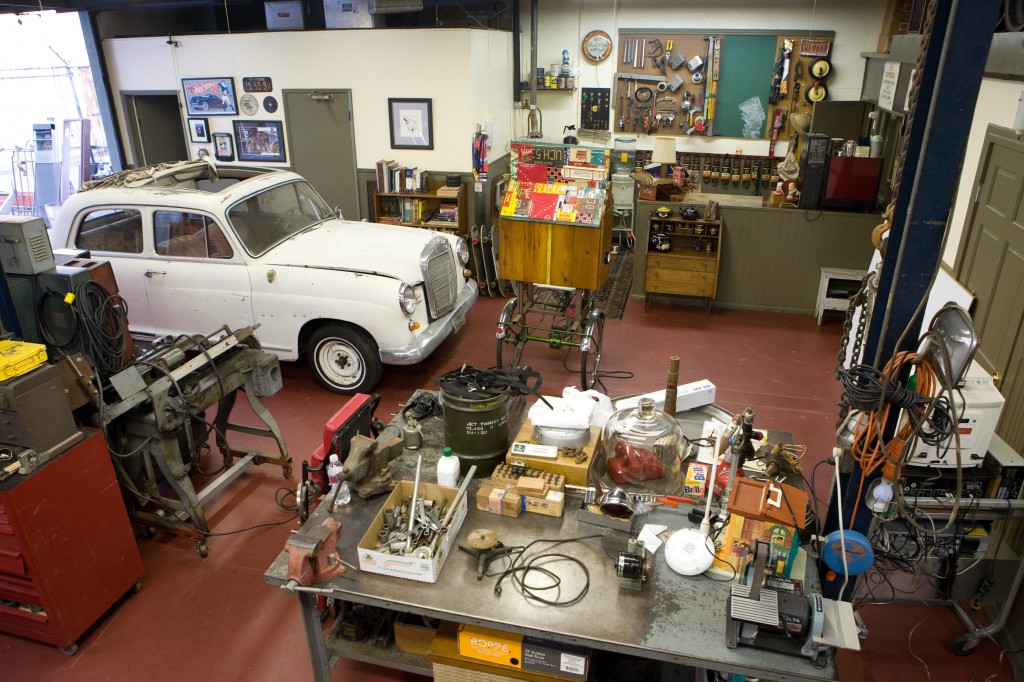 A birds eye view of Mister Jalopy's headquarters. An old mercedes benz sits waiting for a few repairs, including bakes and replacement top. Mister Jalopy bought it to drive around whilst smoking a cigar. He later realized that smoking a cigar while driving a steering column shifted manual would be difficult. O the table in the foreground sits the days garage sale haul, including an assortment of tools, a motorized display base and an old pump, possibly from a fish tank.

The speed and power meters for the Clayton Dyno (see next photo) is attached to a mechanics multi-meter with big chunky oversized gauges and an oscilloscope. This unit allows a technician to read volts, dwell, combustion percentage, rpm, vacuum and more. 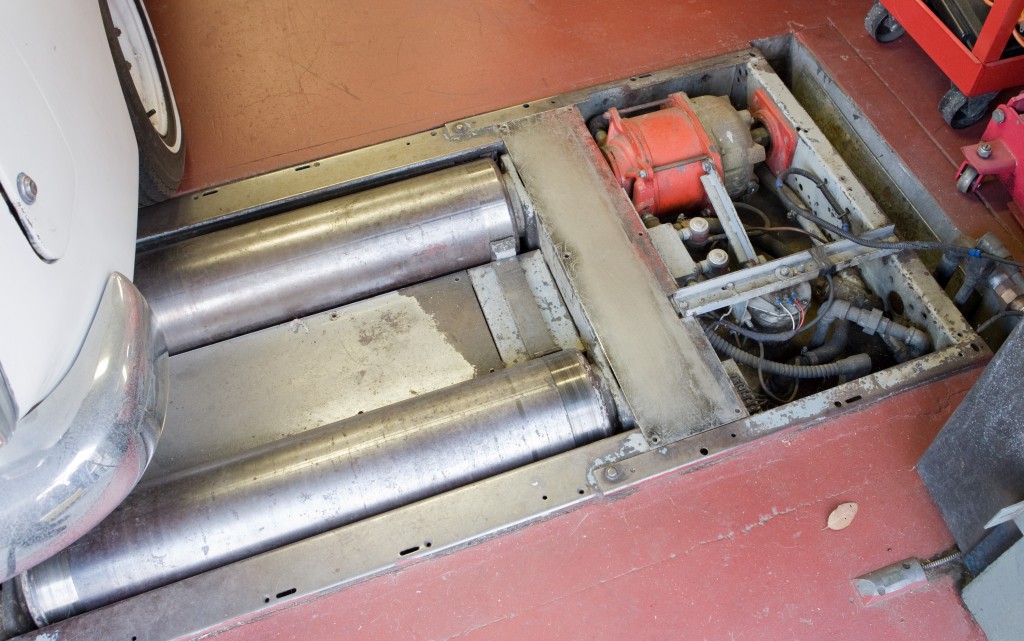 The business end of a Clayton Dynamometer. Dyno's are used by tuners and mechanics to measure the amount of engine power that actualy makes it to wheels. 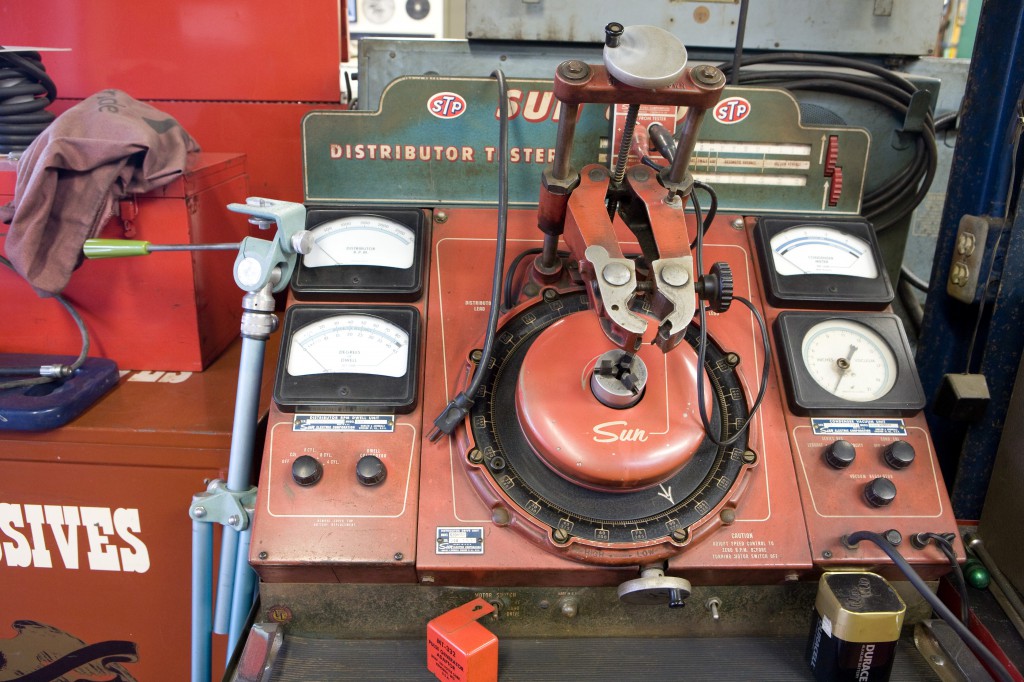 A distributor tester with vacuum pump. After attaching the distributor it is placed under vacuum and spun to several thousand RPM. The degrees of dwell can then be read and the distributor can be tested for vacuum leakage. 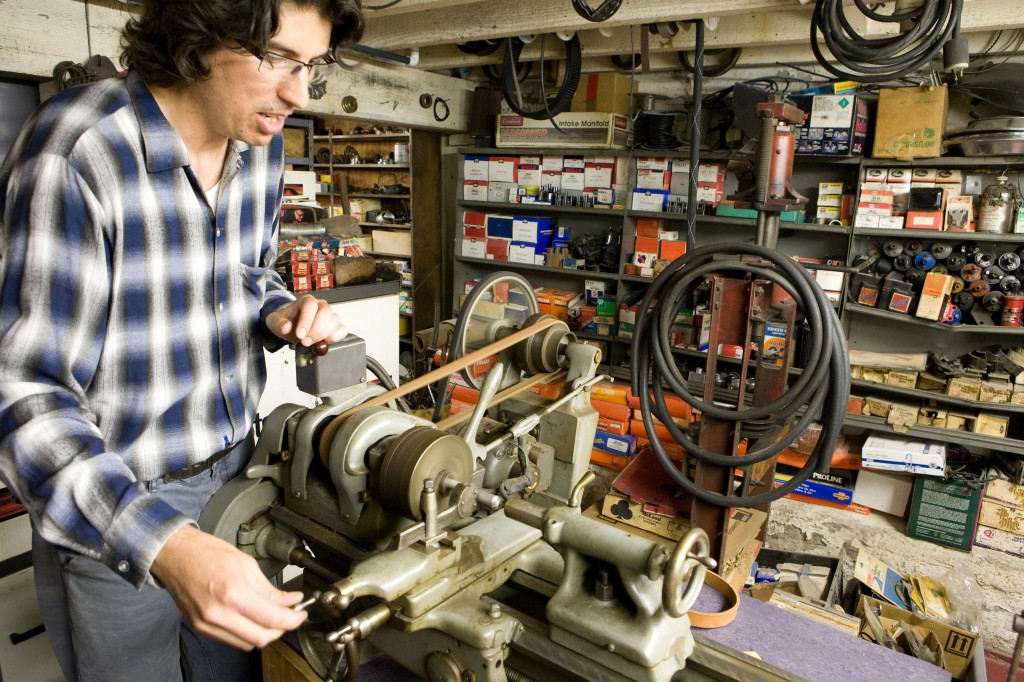 Mister Jalopy had never used a lathe before but had been reading a book about machining and when he found this beautiful American made lathe at a garage sale. The seller wanted $250 for, Mister Jalopy offered $150, but they wouldn't take it. He came back a week later and bought it for $120. In this photo he is demonstrating the knurling tool. 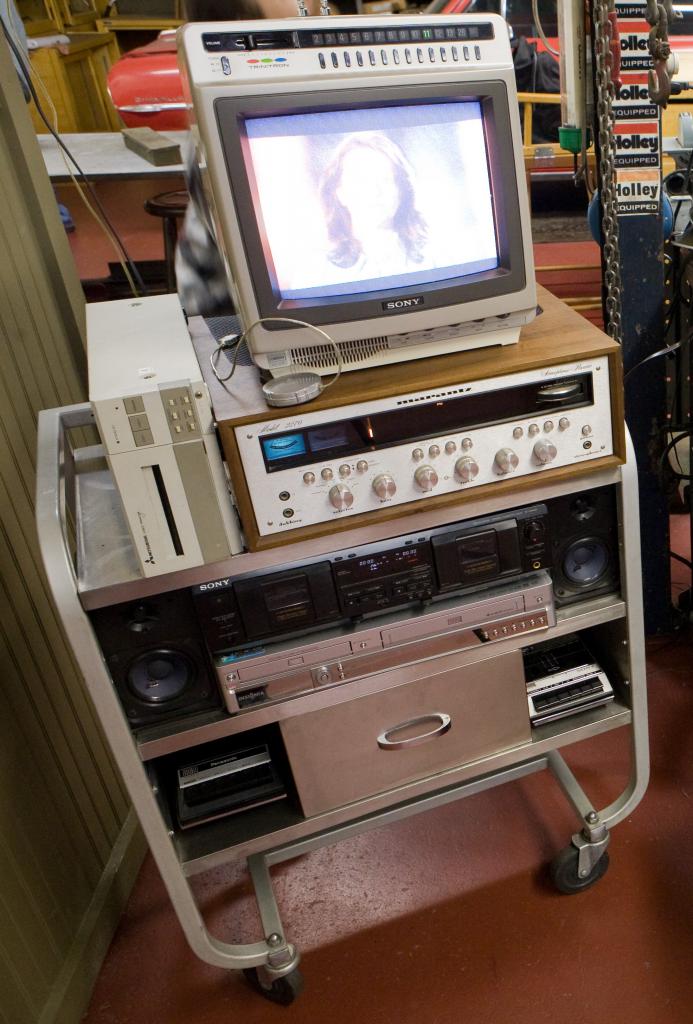 Mister Jalopy has been buying old mix tapes at garage sales and digitizing them for his listening enjoyment. This is his media capture station, with (from top to bottom) a pristine white Sony TV, Mitsubishi thermal video printer, USB audio interface, Marantz receiver, Sony dual cassette deck, DVD / VHS deck, speakers and two portable cassette decks all housed in a stainless steel medical cart. He bought the first portable cassette deck (left) at a garage sale because it reminded him of the deck he had when he was a kid. He bought the second one (right) a week later, it was the exact model he used to own. 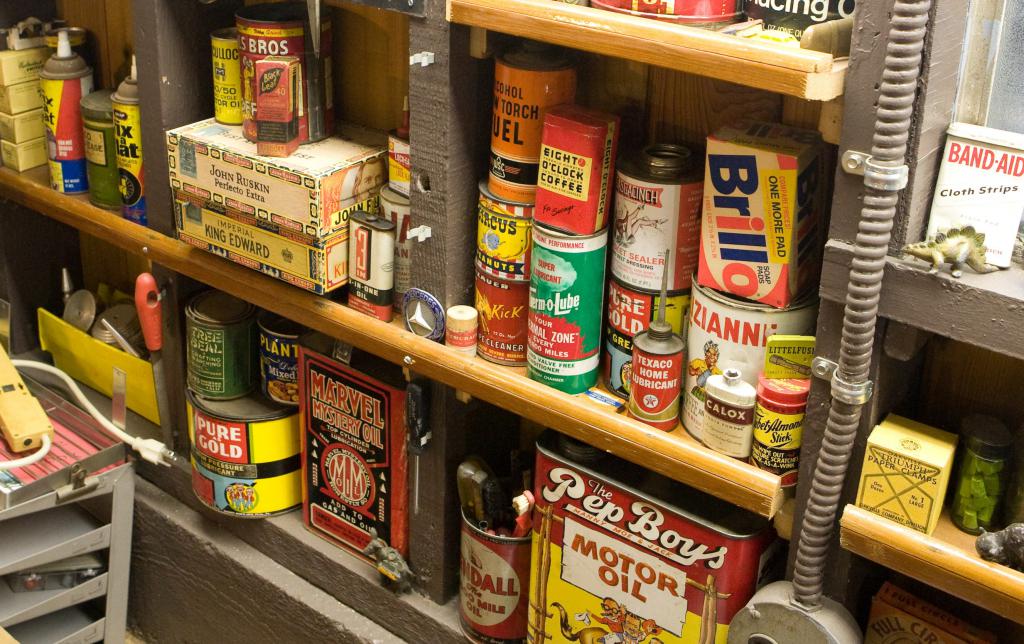 A collection of vintage cans like the ones Mister Jalopy used to cover the roof of his Urban Guerrilla Movie House. Some of these brands, such as Marvel Mystery Oil, still come in these exact same containers.

Mister Jalopy found the baby jars full of sorted parts at a garage sale and paid almost nothing for every fastener he will probably ever need. 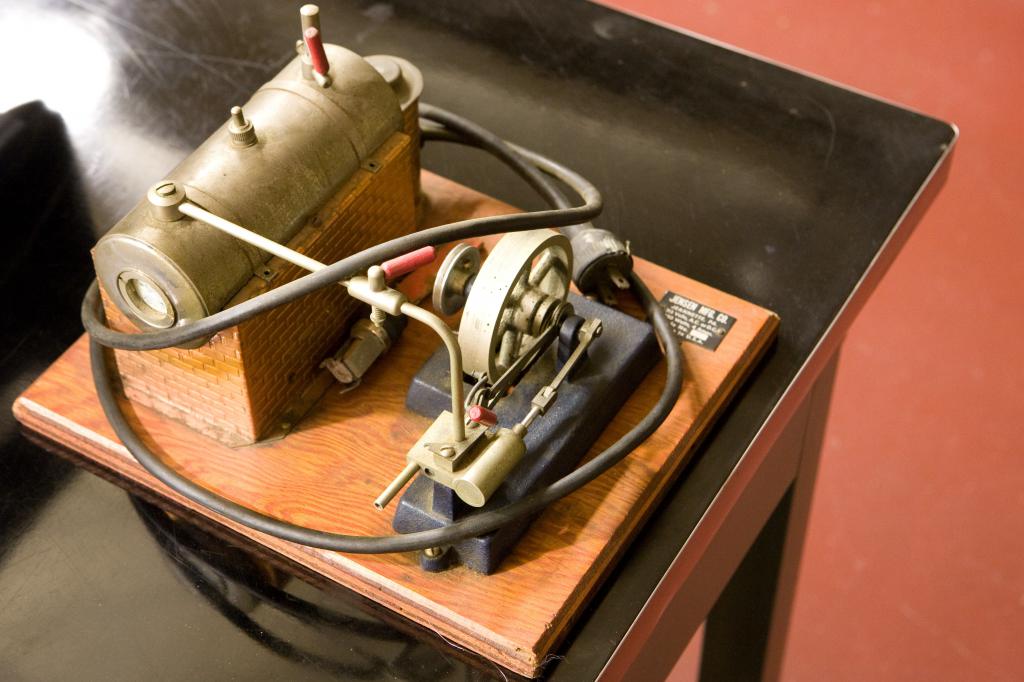 A vintage model steam engine. Ads for these little engines appeared frequently on the pages of Popular Science / Electronics and other hobbyist magazines in the '50s. Mister Jalopy pointed out the irony of using 110V line voltage to boil water to spin a small wheel. 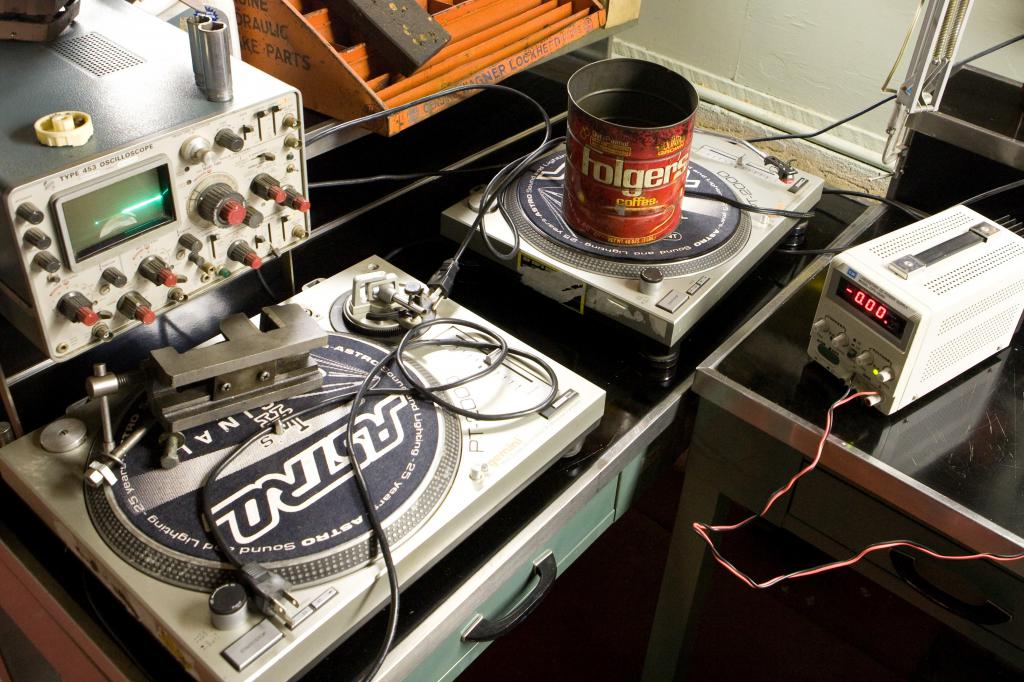 Mister Jalopy purchased the oscilloscope at left from a smoker, when it is powered up the room smells like old tobacco and ash trays, which is somehow pleasing. The lab power supply on the right formerly powered a tattoo gun but now powers various projects in development. 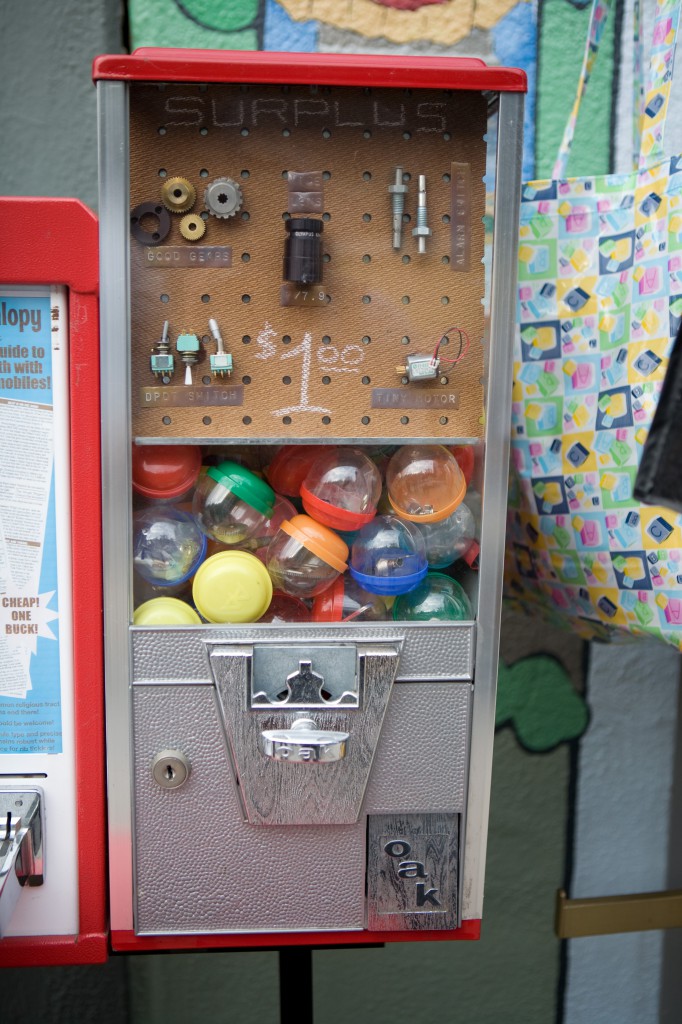 The best gumball machine ever dispenses various surplus parts including random optics, switches, gears and motors. The price may be a bit steep, but I suppose that is par for the course when it comes to vending machines in general. Would you rather spend a dollar on a brass chain or something you could actually use to make something cool? 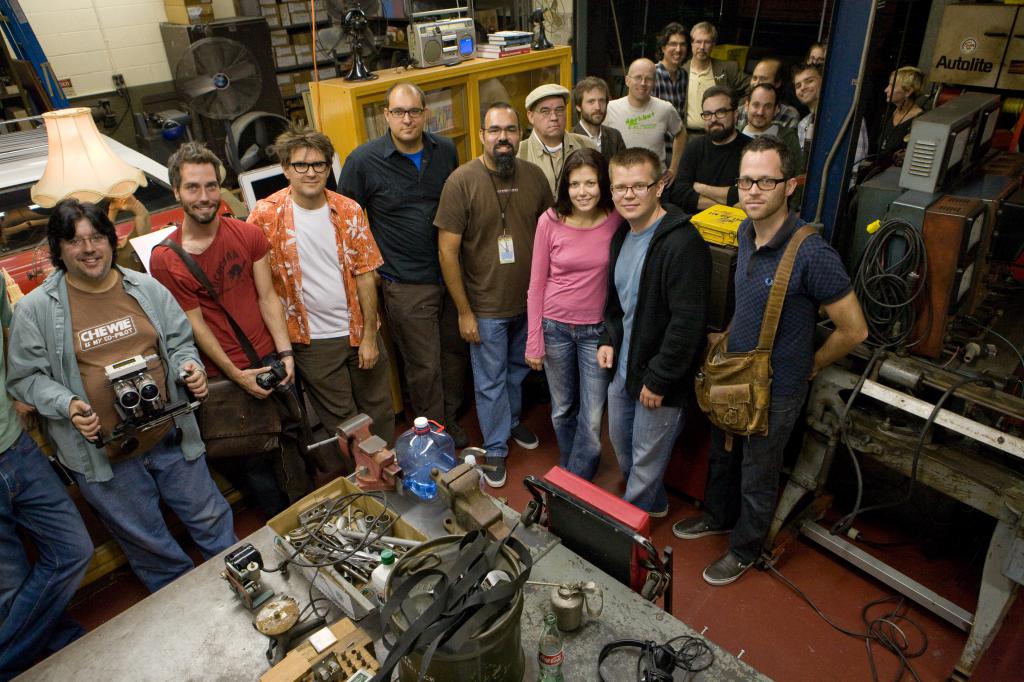 A group shot, can you pick out all the notable nerds? There are plenty of 'em in that photo!

NOTE: I originally wrote these captions for a WIRED News photo gallery, but the piece ended up not running. =]